About Panjikant
About Marguerite Dabaie

This work of historical fiction is set in the 7th century and follows the story of sixteen-year-old Upach, a headstrong and spunky teenage girl whose greatest desire is to follow in her father Shafnoshak’s footsteps and travel the Silk Road in order to become a successful merchant. The problem, however, is that women were rarely afforded the freedoms to leave their hometowns.

Upach’s younger brother, Vandak, is Shafnoshak’s apprentice and is slated to eventually take over the family business. Vandak is well-meaning, but not taking to the apprenticeship as well as his father would hope. In a desperate attempt to assist Vandak in his studies, Shafnoshak reluctantly agrees to take Upach with them on their next caravan run to China in order for Vandak to have a sort of study partner.

This unusual opportunity gives Upach a taste of the freedom and knowledge she craves. She is allowed to travel far beyond her home’s walls, learns tremendously about people and cultures outside of her own, and even learns how to read (in secret, with the help of Vandak). Upach’s freedoms are only a taste, however, as she still contends with the disapproving eyes of society at large and the threats of ruining her father’s livelihood if she were to step too far “out of line.”

When Shafnoshak’s caravan is attacked by bandits, leaving Upach as one of the only escapees of the siege, her life changes drastically.

For a long time, I have had a drive to tell stories. To me, the lyricism of the visual arts coupled with powerful storytelling is the best way to tell a story effectively. I have always been drawn to comics and sequential art, which so seamlessly combine drawings with words. People and their life experiences inspire me. Hearing and reading about others and putting them in my work helps me conceptualize the human condition—while, hopefully, helping others do the same. My work tends to be detail-oriented, steeped in culture, history, and society. These types of works allow people to evaluate their own society through the lens of another by being transported into another life –and most likely a different time and place. That said, my greatest inspirations are folk tales and history. I also study various worldwide cultures and research their decorative motifs, folk art, and clothing. These often tend to find their way into my drawing. My work has an old-fashioned, decorative feel to it, but it still explores difficult themes, such as racial and religious intolerance, sexism, and slavery.

I prefer to paint with watercolor because of the jewel-like, bright tones that it can create. I enjoy being able to see texture and the pooling of the colors. It gives the work a handmade, slightly clumsy feel, as opposed to slick, polished work that might not look like an artist’s hand was involved. It’s a way to further my homage to humanity. Crisp, graphic line work over the watercolors create a strong skeleton from which the more imprecise watercolors can thrive.

I strive to sweep people into the work, to have the audience think of it as an unforgettable storytelling experience. In A Voyage to Panjikant, my goal is to make the audience feel like they are spectators in the lives of a Central-Asian merchant family on the Silk Road. Through their experiences, we can learn what life was like in 7th-century Uzbekistan while also acknowledging the positives and negatives of the culture at the time—a sort of affirmation of humanity, which makes the story more interesting and believable. My work is often perceived as “serious,” but I perceive it to be more lifelike, with that balance of positivity and negativity. 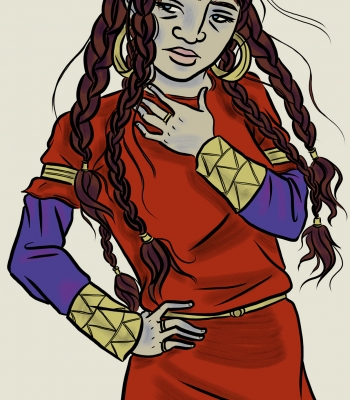 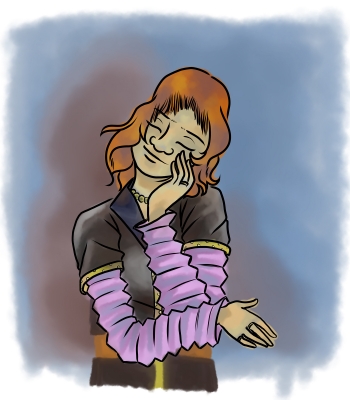 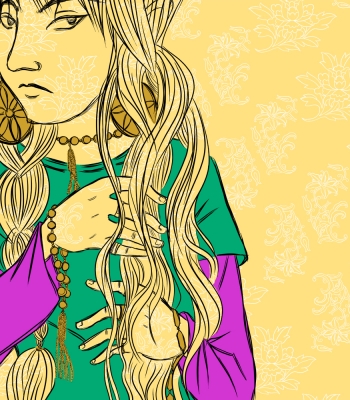 Born in San Francisco, Marguerite moved to New York City in order to attend the School of Visual Arts, where she earned her BFA in cartooning. While there, she was awarded two grants for her comic, The Hookah Girl and Other True Stories, an autobiography about Palestinian-Americans. The cultural differences she has felt between Arab and American cultures heavily informs her work. She is currently working on a new comic, A Voyage to Panjikant, a work of historical-fiction about Central Asians during the height of the Silk Road. Marguerite has also contributed to multiple comics and illustration anthologies throughout the years (and continues to do so).

Her MFA thesis that she wrote while at the Fashion Institute of Technology,Women in Middle-Eastern Comics, exemplifies her academic side. She strives to combine comic art with academia. She was awarded the Master of Fine Arts Medal during her time at FIT.

She is a freelance illustrator and has worked with such publications as The Normal School, Wherever Magazine, Mizna, and Just World Books. She is also a contractor and regularly supplies services for NYU, the Electronic Intifada, and the Journal of Palestine Studies.

Once a year, Marguerite co-hosts Pete’s Mini Zine Fest, the fest-in-a-bar, in Brooklyn.

In their free time, Marguerite and her husband, Chris, love to play video games, participate in pen-and-paper RPGs, and watch good-bad movies. They are self-proclaimed nerds.