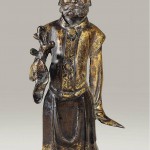 A GILT-BRONZE MODEL OF A SOGDIAN FIGURE
17TH CENTURY
The standing figure is cast with one arm raised holding a branch. He is dressed in typical Sogdian dress with long flowing sleeves and wears a pointed hat. His face is depicted with a prominent nose, bushy eyebrows and curly beard.

The Christie’s auction where this figure was sold in claims that this is from the 17th century (and even uses the Ming Dynasty as a keyword, also squarely putting its production in the 17th century), but the Sogdians were long gone by then. Are they incorrect, or did the Chinese continue to make sculptures of long-gone subjects? Maybe they had reached mythological proportions? I’m just musing, here.